Blog Drone Reviews
November 22, 2016November 23, 2016 Carter 1706 Views 0 Comments drone, fall, flight, quadcopter
Mini Quadcopters are the perfect way to get into drone flying, and these 6 models are the best out there. Check out the great price to performance ratios!

Investing in a mini quadcopter is the best way to learn to fly a drone. The small, lightweight aircraft are easy to use and remarkably durable for their size. They’re also very cheap compared to most large drones on the market.

Flying a mini quadcopter is even more fun if you opt for a model with a camera. Even a basic camera allows you to take pictures and record video while flying, adding a whole new level of fun to the drone experience.

So which model is best for you? Below we take a look at 6 of the best mini quadcopters with cameras currently on the market.

Why Buy a Mini Quadcopter with a Camera?

Search for “mini quadcopter” online and you come up with dozens of results. Sort through these and you’ll notice they fall into two camps: those with cameras and those without.

So what are the pros and cons of a mini quadcopter with a camera? And do you really need a camera on yours?

In our opinion, a camera makes an otherwise good drone even better. It adds a new layer to the flight experience, allowing you to take video/pictures while flying.

Of course, models without cameras are usually slightly cheaper. But the cost savings tends to be minimal. Pay a few bucks more for a quadcopter with a camera and we can assure you that’s money well spent.

Another benefit of a mini quadcopter with a camera is that it can help you learn to fly your drone more easily. Select models actually relay the camera footage to a screen on your controller. This is known as FPV (first-person flying) or video piloting.

Here’s our opinion on the best mini quadcopters with cameras. These small, lightweight drones can be flown both indoors and outdoors, recording images and videos during flight.

At just a hair under $100, the Parrot MiniDrone Rolling Spider is a lightweight, rugged mini quadcopter with surprising in-flight stability.

A vertical mini-camera is embedded on the underside of the drone. It takes a picture every 16 seconds. Though the quality is fairly low resolution (VGA), it’s still a decent introduction to aerial photography.

Other highlights include its overall flight stability (thanks to a variety of sensors) and the ability to control it from your mobile device. The biggest negative is the short battery life (equivalent to about 8 minutes of flight time).

The sub-$50 Hubsan X4 is one of our long-time favorite mini quadcopters with a camera.

Aside from the camera, this drone is a lot of fun to fly. It’s inexpensive, has a quality controller, and has a range of up to 328 feet. The biggest con is its light weight. This makes it difficult to use even in a very slight wind.

Learn more about the Hubsan X4.

One of the best-selling mini quadcopters in the world, the Holy Stone F181 is a top-quality drone outfitted with an HD camera.

The robust 2MP camera is capable of taking photos at 720 resolution and videos at 30 frames per second. While it’s in no way a professional grade camera, it’s still very good for a $100 drone. Unfortunately, the camera and controller aren’t FPV compatible.

Perhaps the two biggest pros of this quadcopter are its long battery life and flight distance (for a drone of its size). The battery lasts for approximately 10 minutes of use and the flight range is 328 feet. The only real con, considering the price, is lack of the FPV camera function.

Another top pick for aspiring drone pilots interested in basic aerial photography is the UDI U818A. Running for less than $50, the mini quadcopter packs a whole lot of punch in a small package.

The camera shoots video at 640×480 at 30 frames per second – not professional quality, but enough for beginners. Unfortunately, the drone doesn’t feature any stabilization technology so the video footage is often shaky.

With that said, the drone itself is top-notch. It comes with an intuitive controller and is very easy to pilot. It’s very responsive, allowing for increasingly aggressive maneuvers as you become a more experienced pilot.

Learn more about the UDI U818A.

The $25 Cheerson CX-10C is quite possibly the world’s smallest camera quadcopter.

The “nano” drone is outfitted with a 0.3MP camera that takes photos and records video. Though the camera is low resolution, it’s still great for learning on and records to a micro SD card.

The most notable thing about this drone is its small size. It easily fits in the palm of your hand. It really is remarkable that a camera can fit on its body without affecting flight.

At just $50, the Syma X52C is another low-cost mini quadcopter with a relatively decent camera for the price.

The camera in question is a 2MP camera. It shoots 720 HD video which is plenty good for aerial photos and video. The drone’s 6-axis gyro makes flight more stable which directly translates into better quality photos/video.

In addition, the drone is easy to fly and high performing. It’s a quick and nimble aircraft. The downsides are the short battery life (less than 5 minutes) and the small flight range (100 feet).

Learn more about the Syma X52C.

Which Mini Quadcopter is Right for You?

Keep in mind that most mini quadcopters are inexpensive. Though many models perform well, it’s important to note that their camera quality won’t be as good as those used on larger drones.

With that said, the 6 mini quadcopters with cameras reviewed above are the best of the best in their size and price range. If you’re new to drone technology, you’ll likely be more than happy with one of these options. 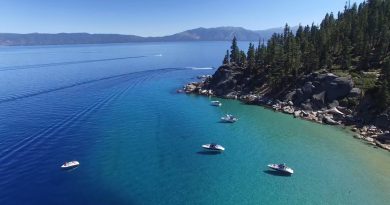 September 22, 2015 FreshSqueezed Comments Off on Keep Lake Tahoe…Green? Must Watch