DJI Mavic Pro Range Test – How Fast Can It Go?

The [easyazon_link identifier=”B01LZ8QTSU” locale=”US” tag=”blueclsolut02-20″]DJI Mavic Pro[/easyazon_link] is the hottest drone in the industry. It’s already challenging the Phantom 4 for the position of the company’s flagship drone.

Two big factors make the Mavic Pro stick out. First, and most noticeable, is its small size and compact design. The second most notable feature is its high performance, especially where top speed and overall range are concerned.

Below we break down the DJI Mavic Pro’s specs and performance in more detail. We pay particular attention to how fast it can go, as this is a chief concern of those interested in purchasing the drone for themselves.

DJI lists the top speed of the Mavic Pro as 40 mph.

Of course, you probably won’t hit that in the field. The drone’s top speed was tested in perfect conditions (a windless environment at sea level).

The 40-mph top speed can only be reached in Sport Mode. In normal flight modes, the drone can only reach speeds of up to 22 mph. Switch the drone into Sport Mode and you’re given complete control of the aircraft.

This complete control extends from increasing the craft’s top speed to increasing its overall handling and responsiveness. GPS-assisted flight is turned off so it’s completely up to you to safely pilot the drone.

Sport Mode also increases the drone’s maximum ascension speed. In Sport Mode, the craft can ascend at a rate of 16.4 feet per second. Environmental factors like wind speed and altitude also affect ascension speed in a real world setting.

Top speed isn’t of much use if you have to keep your drone in close proximity at all times.

Fortunately, the Mavic Pro has a range of 4.3 miles. This range is only available when the drone is used with the optional Skycontroller.

Piloting the drone with solely your smartphone and the DJI Go App brings the overall range down to 2.5 miles. Of course, this is still a pretty impressive range for a drone of this size.

The Mavic Pro utilizes a variety of flight modes to increase user experience.

The most exciting flight mode for those interested in maximum speed is the above-mentioned Sport Mode. This mode gives the user complete control of the craft and ups its top speed from 22 mph to 40 mph.

Return to Home is a flight mode previous DJI drone users already know about. Give your Mavic Pro this command and it will automatically return to the controller. Not only is this mode very convenient, it also makes getting out of emergency situations that much easier.

A lot of people ask about how the Mavic Pro stacks up against the Phantom 4.

As far as top speed goes, the Phantom 4 has the Mavic Pro beat. It can reach 45 mph in Sport Mode compared to the Mavic Pro’s 40 mph.

This is thanks to the Phantom 4’s more powerful motor and robust design. Though these translate into a higher top speed, they also translate into more sluggish acceleration. The smaller Mavic Pro accelerates more quickly and has less wind resistance.

Camera quality is another factor that must be taken into consideration if you attempt to compare the two drones. Though both cameras are top quality, the camera on the Phantom 4 is slightly better.

So, which of the two drones is the best? There’s no definitive answer to that. The Phantom 4 is better for those that need that extra 5 mph top speed while the Mavic Pro is better in most other regards (especially when its lower price is taken into consideration).

The Mavic Pro was actually created as a direct competitor to the GoPro Karma. Both drones combine very small size with top quality cameras and performance.

One factor to take into consideration right from get-go is that the GoPro Karma is currently in recall.

Other than that hiccup, the Karma has a top speed of 35 mph compared to the Mavic Pro’s 40 mph top speed. Flight time for the Mavic is 27 minutes compared to just 20 minutes for the Karma.

Finally, the Karma’s range is only 1.83 miles against the Mavic’s extremely impressive 4.3 miles.

In short, we strongly feel that the DJI Mavic Pro is a better drone than the GoPro Karma.

The DJI Mavic Pro is one heck of a drone. It packs a powerful punch in its small, compact package.

Yet its small size does nothing to sacrifice quality. The camera is more than good enough for all but professional filmmakers. In-flight performance is likewise excellent as few need a drone that goes faster than the Mavic Pro does.

The Mavic Pro is also easy to use with intuitive controls. The variety of GPS-assisted flight features even allow drone newbies to pilot the craft with ease. Yet despite its ease of use, the drone is still robust enough for more experienced users.

All in all, the Mavic Pro is the best drone for its price. Spend $749 to get the drone without a controller (you must pilot it solely with the DJI Go App on your smartphone) or spend $1,000 to get the drone and the Skycontroller. 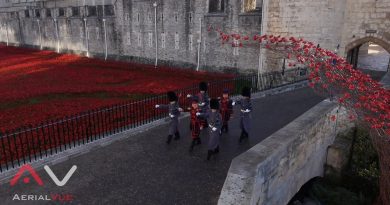 Tower of London Covered In Poppies

October 26, 2015 FreshSqueezed Comments Off on Tower of London Covered In Poppies