Buying a high-end drone like the [easyazon_link identifier=”B01LZ8QTSU” locale=”US” tag=”blueclsolut02-20″]DJI Mavic Pro[/easyazon_link] is a big investment. The model costs nearly $1,000 so it’s important to make sure it’s the right drone for you.

Its high price tag plus its popularity mean that a lot of questions have already been asked and answered about the Mavic Pro. We’ve gathered the most important here to help inform your decision about whether to invest in this drone.

Here are the answers to the most commonly asked questions about the DJI Mavic Pro.

How Much Does the Mavic Pro Cost?

According to DJI, a cheaper option that costs $749.99 will be available soon. This budget option includes the exact same drone without a controller.

While it’s tempting to save the money, we recommend that most users buy the $999.99 version that comes with a controller. Though you can operate the Mavic Pro with a smartphone only, it’s difficult to use it for more than just selfies in this scenario.

Not only does the controller make it much easier to control, it also increases the Mavic Pro’s flight range.

What Does the Mavic Pro Come With?

Buy the Mavic Pro and you’ll receive two extra batteries, a carrying case, a quad battery charger, a USB adapter, and extra propellers in addition to the drone itself.

How Does the Mavic Pro Compare to the Phantom 4?

It’s a matter of opinion. Some people prefer the Mavic Pro while others still swear by the [easyazon_link identifier=”B01CFXQZD0″ locale=”US” tag=”blueclsolut02-20″]DJI Phantom 4[/easyazon_link]. What’s certain is that both are of the highest quality.

The most noticeable difference is size. The Mavic Pro is much smaller than the Phantom 4. Thanks to its folding design, it can be folded down even smaller for better transportation and portability.

The small size of the Mavic Pro doesn’t affect its stability. In fact, the drone appears more stable, even in high winds, than the Phantom 4. The only downside to its smaller size is that it has a slightly slower maximum speed (40 mph instead of 45 mph).

Another big difference between the two is the camera. The Mavic Pro doesn’t use a fixed focus so you actually have to tap on the screen where you want it to focus. Other than that, the video quality is mostly comparable.

The Mavic Pro’s gaming-style controller is also more intuitive. It’s easier to use than that of the Phantom 4. The Mavic Pro can also be controlled without a controller solely from your smartphone.

In short, the Mavic Pro is a lot like the Phantom 4, except in a smaller package. It has slightly (and we mean slightly) poorer performance and video quality, but makes up for that with ease of use and portability.

What is the Mavic Pro’s Flight Time?

Fully charge the batteries and the flight time of the Mavic Pro is about 20 minutes. A number of conditions, most notably weather and altitude, can reduce or increase flight time from about 15 minutes to 27 minutes.

How Does the Mavic Pro Handle in the Wind?

The Mavic Pro handles high winds just as well as the larger Phantom 4.

Unlike the Phantom 4, the drone didn’t drift in moderate wind. However, the video quality was noticeably less stable.

With that said, the Mavic Pro can easily handle winds between 19 mph and 24 mph, without flight performance or video quality becoming affected.

How Durable is the Mavic Pro?

It’s hard to give a solid answer on the long-term durability of the Mavic Pro since it’s relatively new to the market.

What is clear is that it’s a solid and rugged machine. We’ve put the Mavic Pro through the wringer and it’s come out just fine. It holds up well to the bumps and bruises of regular use with flying colors.

The arms of the Mavic seem just as durable. DJI claims they should last for at least 5,000 total opening and closing cycles.

What Devices it the Mavic Pro Compatible With?

The Mavic Pro is compatible with most smartphones and mobile devices.
Your device must be IOS or Android compatible and fast enough to run the DJI Go App. A Micro USB or Lightning cable is also required. A special adapter is available for DJI for use with USB type C.

DJI has also developed its own VR (virtual reality) goggles. These allow for an even more immersive FPV (first-person viewing) experience. The DJI Goggles are compatible with the Mavic Pro.

Is It Easy to Update the Mavic Pro?

Updating the Mavic Pro is a cinch. All you have to do is go to the DJI website on your smartphone. Updates are available here to download and install.

Is the Mavic Pro Good for Beginners?

The $1,000 price tag will steer many UAV beginners away from the Mavic Pro.

Unless you have experience piloting drones, you should be hesitant to invest in the Mavic Pro. Even though its controls are intuitive, it’s not necessarily the best drone to learn on, as crashing it can put you out big money.

At the same time, the Mavic Pro was designed with beginners in mind. It’s stable, easy to operate, and features a number of GPS-operated hands-free flight modes to turn to if you get into a rough patch.

A good solution is to learn the absolute basics on a cheaper drone before moving onto the Mavic Pro.

Is It Good for Photography/Videography?

The Mavic Pro is an absolutely phenomenal choice for those interested in photography and videography.

Though it’s video camera is very slightly inferior to the Phantom 4, it’s completely professional to set up professional shots and take top-quality images and video.

So, Is the DJI Mavic Pro Right for You?

Drones don’t get much better than the DJI Mavic Pro. It’s a top-quality quadcopter with intuitive controls, great performance, and an impressive camera. Though the Mavic Pro isn’t for everyone, it’s a great choice for those that want almost everything the Phantom 4 offers in a smaller and more affordable package.

Top 5 Shots You Should Take With Your Drone 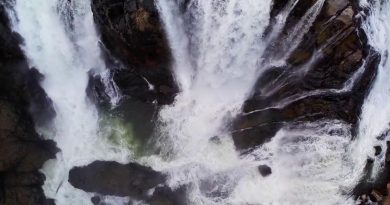