Towards the end of 2015, the Unmanned Aircraft Systems (UAS) Registration Task Force Aviation Rulemaking Committee of the Federal Aviation Administration (FAA) came out with a proposal for drone weights. In summary, what the proposal suggested is for toy drones that weigh 250 grams (or 8.8 ounces) or less to be given a free pass, while any drone that weighs somewhere between 251 grams to 55 lbs will need to be registered with the FAA.

While this move generated complaints, there were also some sectors and individuals who expressed their support, especially since the proposal was a result of weeks of study and deliberation. It was done in relation to the growing concern for the increase in popularity of consumer drones.

Technology company DJI (Da-Jiang Innovations Science and Technology Co, Ltd) was one of the companies represented in the task force that came out with the proposal. As the leading manufacturer of aerial photography systems and drones, DJI knows how important it is to adhere to laws, especially those mandated by the FAA.

Despite this regulation, however, many say that the popularity of drones will continue to increase this year. In fact, it is even possible that a number of applications intended for drone technology will sprout. As such, it is important to learn all that you can about drones in relation to FAA regulations.

To help drone users and aerial photographers, here is an outline of DJI products, particularly their specific characteristics and DJI Phantom weight.

Developed and introduced in the market in the early part of 2013, DJI’s Phantom series is considered one of the most popular in the world. Its technology allows users to enjoy ease of use, as well as efficiency in terms of performance.

Phantom drones are known as quadcopters and are classified into different brands.

DJI’s Phantom 2 has a multi-functional quad-rotor system that defines its ready-to-fly characteristic. Its hover accuracy is at 0.8m when vertical, and 2.5m when horizontal. One of its strongest characteristics is precision flight and stable hovering capabilities, which will allow you to take good quality images.

The Phantom 2 is equipped with a smart battery system that enables it to fly for up to 25 minutes. This is actually one of its strongest features. In addition, it is also preferred by people who like its highly integrated design.

The Phantom 2 is considered by many as light and easy-to-use, especially with its built-in GPS and stabilized video footage feature.

The Phantom 3 looks quite like the Phantom Vision Plus, although it has a larger battery and has an electronics-laden motherboard. It has four major models – the Standard, the 4K, the Advanced and the Professional.

The Phantom 3 Standard is an easy-to-fly drone with a 2.7K video camera that is able to take photos at 12 megapixels. Like the other Phantom models, it is user-friendly and has stabilization features. It’s also equipped with a Wi-Fi. Its flight time can go as long as 25 minutes.

With the Phantom 3 Professional, taking aerial images has become easier. Compared to the Phantom 2, the Professional’s camera is way better and (as it is able to shoot 30 frames per second) produces clear images that are at 12 megapixels. Additionally, its 4K video is complemented by a professional lens that lessens the distortion in images.

Including the battery and propellers, DJI Phantom 3 Professional’s weight is 1280g, slightly heavier than the Phantom 3 Standard.

Finally, there’s the Phantom 3 Advanced, which has an integrated DJI Lightbridge and customized commands. Other interesting features are the flight logs that are automatic and a vision positioning system (VPS) that makes managing the drone and capturing images easier. Basically, the Professional and Advanced versions are almost identical in terms of design, weight and features. The only difference is within their camera system. Pro has a 4K camera while Advanced has only a 2K camera.

With all its added features and bigger & more advanced batteries, it is understandable that both Professional and Advanced are the heaviest among the Phantom series.

DJI also has another drone in the market – the Inspire 1. This drone is getting extra attention mainly because of its more innovative features and alien-like design. A lot of drone users, however, have also pointed that the Inspire 1’s features can also be found in the Phantom 3 series, particularly the Professional model. For one, both drones have a 12 megapixels camera with a 4K-resolution video capable of capturing 30 frames per second.

But, if you consider even the tiniest details when comparing drones, the fact that the Inspire 1 weighs heavier than any of the Phantom drones will matter. Inspire 1 is twice as heavy as the Phantom 3. While the DJI Phantom 3’s weight is at 1280g, Inspire 1 weighs a heavy 2935g. Clearly, the Phantom 3 Professional (or any other Phantom series models) is definitely the better option if weight matters to you. This is especially handy if you move around or travel a lot. The Phantom 3 is lighter and easier to handle. You can even takeoff and land your Phantom 3 using both your hands.

Because of its size and weight, though, some consider Inspire 1 as the more powerful drone – as its propellers and motors are larger. In addition, it is more durable than the Phantom because it is made of high quality materials, not a lot of plastic like the Phantom drones. So, for many, the Inspire 1’s heavy weight is acceptable given that it offers better quality and power.

With drones continuing to dominate the market, it has become important for consumers to examine their options before choosing to buy one – especially now that the FAA is trying to regulate things. So, whether the major factor is the price, the features, or the weight, a little background information on drone technology is a welcome help. 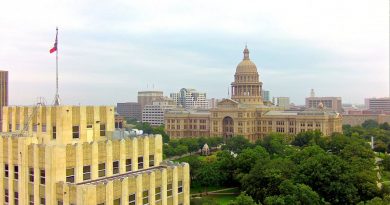 September 22, 2015 FreshSqueezed Comments Off on You’ve Never Seen Austin Texas Like This