Should You Upgrade from DJI Phantom 4 to DJI Mavic Pro?

The [easyazon_link identifier=”B01LZ8QTSU” locale=”US” tag=”blueclsolut02-20″]DJI Mavic Pro[/easyazon_link] has received a lot of buzz as of late – and for good reason.

Many drone enthusiasts consider it a big step forward in personal UAV technology. The Mavic Pro’s small size makes it extremely portable without sacrificing camera quality or performance. It’s loaded with many of the same features as a much larger drone.

So how does it stack up against DJI’s Phantom 4? Long heralded as one of the best high-performance drones on the market, the Phantom 4 has established a solid name for itself thanks to superior camera quality and remarkable performance.

Below we look at the two DJI drones side by side before offering our opinion on whether you should upgrade from the Phantom 4 to the Mavic Pro.

You get a small, compact drone with a powerful camera. In fact, the Mavic Pro was designed to compete directly with GoPro Karma (which is currently being recalled). It’s small to begin with and folds down even smaller for increased portability.

A gaming-style controller makes piloting the Mavic Pro easy. You can also control it with just your smartphone. The drone has a high level of intelligence – it can recognize objects including animals, cars, and people, and then track them on its own.

You get a polished quadcopter with smart features and a high-quality camera. The Phantom 4 is easy for beginners to learn on yet robust enough for expert applications.

An advanced optical-avoidance system reduces the risk of accidental crashes (and protects your investment). The controller is highly intuitive. The drone itself is a sturdy piece of technology that remains steady in moderate wind.

Learn more about the DJI Phantom 4.

We looked at the Mavic Pro and Phantom 4 side by side to see how they stack up against each other in terms of video quality, stability and performance, and controllers.

A big difference between the Mavic Pro and Phantom 4 is the type of camera they use.

The smaller Mavic Pro camera is similar to what you’d find on a high-end smartphone. Despite its small size, it performs takes great photos and videos.

The Mavic Pro doesn’t have a fixed focus (like the Phantom 4) so you have to tell it where you want it to focus. This is easily done by tapping that part of the image on the DJI Go App.

The Phantom 4’s camera performs better in low-light conditions and has more digital sharpening than the Mavic Pro. It also has a wider field-of-view (FOV).

Its small size means the Mavic Pro is buffeted more when winds pick up. The larger and heavier Phantom 4 is noticeably more stable in these conditions.

On the flip side, the Phantom 4 is more cumbersome. Its controls are more complex to learn. The Mavic Pro can be controlled with just a smartphone, so it’s easy to take out of the bag and go.

Another factor related to weather is durability. The Phantom 4 can take a hard tumble without damage. The Mavic Pro seems equally durable during crashes but it will be interesting to see how the high-stress folding points stick up to long-term use.

Also, if speed is important to you, it’s worth noting the Phantom 4 is the fastest (by a hair) of the two. Its top speed is 45mph against the Mavic’s 40mph.

So Which Drone is Right for You?

The Mavic Pro and Phantom 4 each have their advantages and disadvantages. The best one for you depends on several factors, most importantly your planned applications.

The portability of the Mavic Pro makes it a great choice for sports and outdoor activities. It comes with several of the same tracking features as the Phantom 4 so you can easily set it up to follow you while skiing, biking, hiking, etc.

Both drones excel at photography/videography. Though the Phantom 4’s in-flight stability edges it ahead, both cameras are extremely high-quality.

The Mavic Pro is undoubtedly the easiest to use of the two. It’s easier to set up and easier to fly. You don’t even need to use a controller – you can fly it solely from your smartphone.

The Phantom 4 is stronger and more robust. It has a bigger engine and bigger propellers. This makes it ideal for those that want to carry or lift small objects (such as packages).

The Mavic Pro is great in situations where quick deployment is essential. It’s a good choice for first responders and others where a small aircraft that lets you get the quickest visual of an area is all you need.

So is an Upgrade Worth It?

There honestly isn’t much of a difference between the DJI Phantom 4 and DJI Mavic Pro.

If you already have the Phantom 4, we see no reason to upgrade to the Mavic 4. Your drone already has nearly the same camera quality and performance. The only reason to make the switch is if you want a smaller and more portable drone. 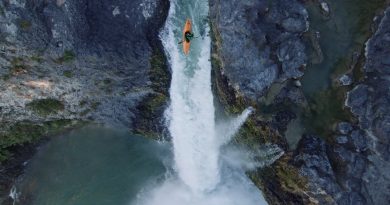 October 19, 2015 FreshSqueezed Comments Off on Stunts, Waterfalls, Cliffs And Other Dangerous Drone Clips

Beach Drone Video of Venice California Is Nothing Short of Incredible

December 30, 2015 FreshSqueezed Comments Off on Beach Drone Video of Venice California Is Nothing Short of Incredible