Watch this drone footage carefully to feel the thunder of Niagara Falls.

In this video, you will be witnessing a boat reaching the Niagara Falls so closely. Your heartbeats will start throbbing at a faster speed as you come closer and closer to the fall, but you will be amazed to see the beauty of the fall.

As the Niagara Falls drone footage proceeds, you will come across more and more things exciting things.

You will ask yourself how beautiful this Niagara Fall is, and the scenic beauty is extravagant. So, it is personally recommended to visit this place as a family spot because this place is listed among the wonders of the world that you won’t be able to see anywhere else.

Watch one of the Wonders Of The World unleash its power. Beautiful flybys of the waterfall and a boat that gets dangerously close to the action. Thanks for the masterpiece Ultimate Aerials!

You can even witness the bright rainbow forming over there in the Niagara Falls that makes the view even more enticing to see. The closeness of the boat is well captured by the flying drone. The drone not only captured the scene but also captured the real essence of the location. Hats off to the flying capacity of the drone that has been able to record the whole footage in the dangerous sessions too. Capturing is not an easy task, but with this drone, even the difficult tasks have become easier. 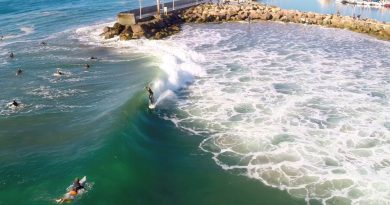