The Mavic Pro is DJI’s latest entry into the world of high-performance drones. Many people claim the drone has all the power of the Phantom 4 in a smaller package.

DJI graced the Mavic Pro with a number of exciting new features. Yet one that’s getting a whole lot of buzz as of late is its “Sport Mode.”

Also available for the Phantom 4, Sport Mode has become a DJI staple. Switch into this mode to fly your done freely with no restrictions. Handling and responsiveness are increased as well as top speed.

So, what exactly is so special about Sport Mode? And how fast can the DJI Mavic Pro really go? Let’s take a look at what makes this high-speed drone tick.

Let’s start with a little background on the compact Mavic Pro.

The drone clocks in at 1.62 pounds without the gimbal cover and 1.64 pounds with it. Despite its small size, the drone has a maximum flight time of up to 27 minutes. However, this figure is usually closer to 21 minutes in real-world conditions.

The Mavic Pro is already noticeably smaller than its predecessor, the Phantom 4. Yet it’s capable of folding up even smaller for easier transportation and storage. This portability makes it a perfect travel-friendly drone.

The camera used on the Mavic Pro has a 1/2.3-inch sensor (making for a narrower field of view than the Phantom 4) and records in 4K-resolution at 30 frames per second. You can also record in HD 1080p at 96 frames per second. The Mavic Pro’s camera is capable of taking still images at 12-megapixels JPEG or Adobe raw.

Yet another highlight of the Mavic Pro is it’s easy to use controls. The drone can be piloted solely with a smartphone (and the DJI Go App). You can also opt for a gaming-style controller if you prefer to use a joystick for navigation. The Mavic Pro is completely compatible with FPV (first-person viewing) technology like DJI’s FPV Goggles.

In short, the DJI Mavic Pro is easy to use, high performing, and very durable. And with a $749 price tag ($1,000 with a controller), it’s a good alternative to the slightly pricier (and not much better) [easyazon_link identifier=”B01CFXQZD0″ locale=”US” tag=”blueclsolut02-20″]DJI Phantom 4[/easyazon_link].

Sport Mode is one of the most notable flight modes offered by DJI drones.

Unlike other flight modes that use GPS to help pilot your drone, Sport Mode gives you complete freedom with the controls. You can bank, turn, and otherwise fly your Mavic Pro however you like.

The Mavic Pro is a remarkable drone. It might be hard to believe, but it handles even better than the ever-popular Phantom 4.

So, what’s it like to pilot the high-performance UAV in Sport Mode? Well, to put it simply, it’s a thrill.

Reaching the top speed of 40 mph is easy when you’re given complete control of the drone’s controls. Surprisingly, even at these high rates of speed, the craft remains very nimble and agile.

While it’s fun to push the Mavic Pro to hit 40 mph, we prefer to keep the speed to around 25 mph. This is right around the drone’s normal top speed (24 mph) in other flight modes. It’s also pretty darn fast when you’re the only one in control.

Despite the fun of piloting the drone in Sport Mode, it’s not very practical. Most people that are willing to dish out $749 for the Mavic Pro are buying it with a specific purpose in mind, usually some sort of photography or videography.
Getting usable images or video in Sport Mode is near impossible. Keep your Mavic Pro in one of its other flight modes the utmost in stability and obstacle avoidance. You can also tell the drone to follow an object at a set distance in many of these other modes.

DJI created the Mavic Pro specifically to compete with the GoPro Karma.
Both drones are designed with high-performance and portability in mind. The goal behind each was to create a travel-friendly drone.

So how do the two drones compare in terms of speed? The Mavic Pro has a 40mph top speed while the GoPro Karma has a 35mph top speed.
The Mavic Pro edges out the GoPro Karma in most other categories as well. It’s maximum flight time is 27 minutes compared to the Karma’s 20 minutes. It can fly at a distance of 4.3 miles away compared to the Karma’s 1.86 miles away.

How Does the Mavic Pro Compare to the Phantom 4?

One of the hottest debates in the drone world right now is which is better: the Mavic Pro or Phantom 4?

While it’s largely a matter of opinion, what is clear is that the Phantom 4 narrowly beats out the Mavic Pro in terms of speed. The Phantom 4’s top speed is 45mph versus the Mavic Pro’s 40mph top speed.
The top speed for each of the two DJI drones can only be reached in Sport Mode.

The answer to the titular question of “how fast can the Mavic Pro really go?” is 40mph in Sport Mode.

Yet this is the maximum speed given by DJI. In practice, it’s rare to have absolutely ideal conditions. In reality, you’ll likely be able to get the Mavic Pro up to 30mph to 35mph in Sport Mode.
Yet buying a drone isn’t all about speed. While it’s an important factor to some, far more important is the drone’s performance as a whole.

And in the case of the Mavic Pro, DJI has once again created a product that performs at the top of its class. 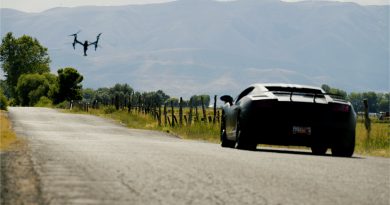